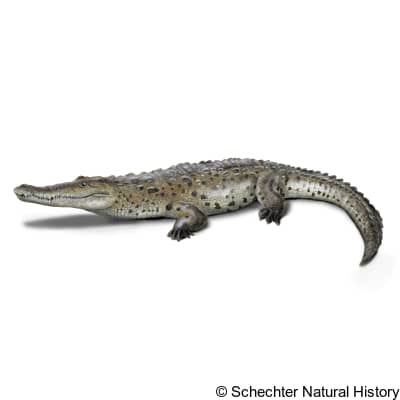 The American crocodile is prevalent in South and Central America and extends North to South Florida.

The American crocodile lives in Coastal areas. They can be found in brackish lakes, lagoons, mangrove swamps, lagoons, and small islands. They are great swimmers and crawl on their bellies on land. They can also high walk. The American crocodile is an apex predator. They can kill and eat large mammals, birds, turtles, snails and so on. Juveniles eat snails, insects and their larvae. They are crepuscular and like to live in solitary. It can swim as fast as 32 km/h and charge up to 16 km/h on land. The crocodylus acutus is oviparous. The female lays her eggs in a clutch of about 30 to 70 on the river bank and guards it ferociously during the 75-80 day incubation period. Sex selection is temperature dependent.

The American crocodile grows up to 15 feet and weighs about 2000 pounds. The males however are larger than the females. The adult American crocodile has an olive brown base, a yellowish underbelly, a narrow head and a long snout. The snout is the key feature that distinguishes the crocodile from an alligator. Behind the snout is a powerful jaw which houses between 30 to 40 teeth and 28 to 30 teeth on the upper and lower jaw. The teeth are sharp and jagged and intertwine with one another. The limbs are short and it has a long and powerful. Scaly spikes run horizontally from the neck to the tail. The eyes, nostrils and ears are positioned on the head. The eyelids are protected which allows them swim underwater. The juveniles are more brightly colored.