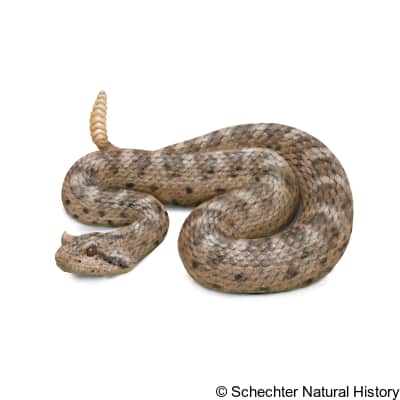 They thrive in desert areas like sandy washes, sand dunes, and open terrains in warm deserts with sandy or loamy soil. They take shelter in burrows and crevices in the day and hunts at night. It has a distinctive method of moving which involves a sideways ‘S’ shaped curve. The mating season is in spring and the females may each produce up to twenty young offspring. They feed on other snakes, lizards, mice and the bigger ones eat birds such as lark sparrows.

This is a relatively small, venomous species of snake usually averaging between 17-30 inches in length. This species is sexually dimorphic as the females are larger than the males. The eyes are vertically elliptical and it has a slender neck and head. Sidewinders are sometimes called the horned rattlesnake owing to the supraocular scales above the eyes that resemble horns and it also has a rattle at the end of the tail. The background dorsal color may be yellowish-brown, light-brown, grey, and cream – they are often a variety of earthen colors depending on their habitats. This background color is often spotted with gray-brown blotches.