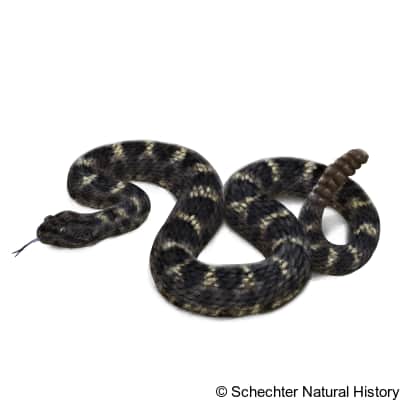 The Arizona black rattlesnake is present only in the state of Arizona. It dwells in elevations about 4000 to 9000 ft.

You will find the Arizona black rattlesnake in Semidesert Grasslands, rocky drainages and open rocky areas. They are diurnal and under favorable conditions are active at night. It hibernates during the cold months. The Arizona black rattlesnake feeds on rodents, lizards and birds. It injects venom into its prey via retractable long fangs. The have live births in summer and is capable of delivering large volumes of venom. When encountered, it should be left alone.

The Arizona black rattlesnake grows to about 42 inches including rattle. It comes in dark gray, brown to black base coloration with bloaches. Juveniles have a light gray base with facial markings and bold brown blotches. As the snake ages, its color gets darker. It has a slender neck and a broad triangular head. Its pupils are oval and placed vertically. The dorsal scale is collapsed and the bottom of the tongue is colored purple. At the tip of the tail is a series of keratinous sections composed of skin that was shed, interlocking loosely.