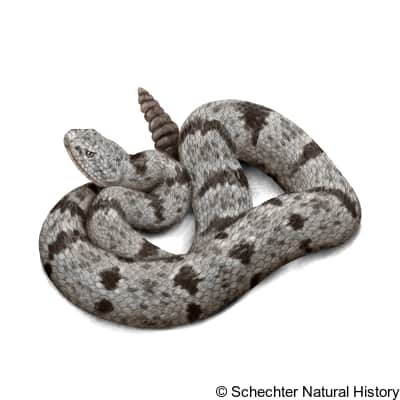 Primarily inhabits rocky areas in mountainous terrain. This includes rimrock, gorges, wooded areas, grassland, and deserts. In Mexico, can be found in mixed boreal-tropical forest and tropical deciduous forest. Although it is known to stay on the ground for the most part, some individuals will climb into low hanging vegetation. Primary diet is lizards but will also eat small mammals, frogs, and snakes.

Smaller rattlesnake with a round, large head and rattle tail. When sheds skin, it produces a new segment to the rattle; rattle itself can break apart. Total length usually under 32 in (81.3 cm). Color usually mirrors that of surrounding rocky habitat. Primary defensive strategy is camouflaging into surrounding with similarly colored dorsum. It is not aggressive unless physically provoked. Males and females breed in the spring and females give birth from July to August; clutches usually contain 1 to 8 young.