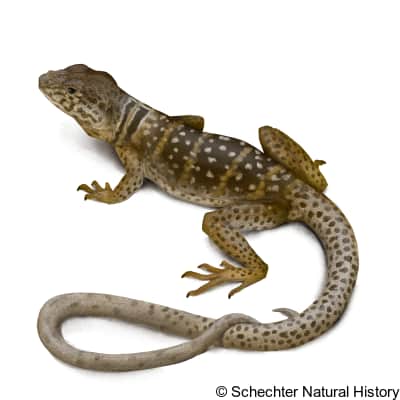 Primarily inhabits rocky deserts with some vegetation. Can be found resting on rocks, hiding under rocks, or underground in burrows. Females also utilize these sheltered locations to lay their eggs. Varied diet includes spiders, insects, small snakes, other small lizards, and vegetation.

Most distinguishable by the black and white bands on its neck that resemble a collar. Dorsum is either olive or brown flecked with white dots; brown and black stripes run from forelimbs to hindlimbs. Flattened vertical tail with brown dots on either side. Belly is usually completely white. Overall appearance can be compared to that of a small dinosaur. Males and females have noticeable differences including more visible body stripes on males, the throat band extending around to the underside on males, and males having larger heads overall than females. Males also usually exhibit a stripe on the tail which is absent on females.