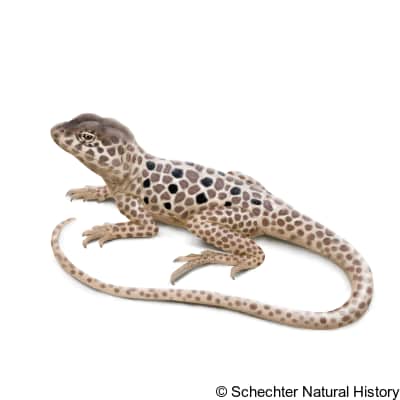 Range spans both sides of the US/Mexico border in southwestern Texas.

This species prefers semi-arid rocky areas, but will also live in shrubland and grassland habitats. It can be found among mesquite or desert thorn-scrub, and likes to bask on rocks, branches, or fence posts. It will quickly retreat to burrows or under vegetation when approached.

This intricately-patterned lizard grows to about 16 inches in total length. It has granular scales, a large head, and a very distinct neck. Its mid-section is wide and flat, and its waist and hips are narrow. Its tail and legs are long and slender. It has a small dewlap and extra folds of skin in the neck region. It is named for the distinct reticulated pattern on its dorsum, consisting of cream-colored lines and mostly brown patches, with a few black patches intermixed on its back (often aligned in rows). The pattern extends onto the dorsal surfaces of its legs and head, but is usually less defined in those areas. Aside from its throat, its ventrum is white and unmarked.