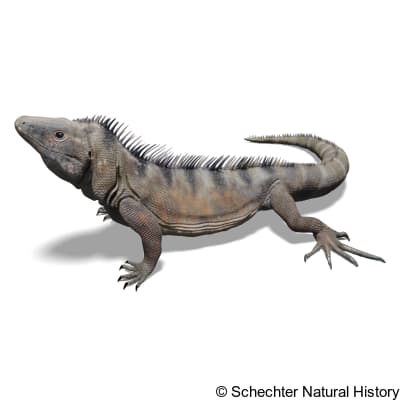 Native to western and southern Mexico, but introduced populations are established in Brownsville, Texas, and south Florida, near Miami.

These iguanas are proficient climbers and they tend to live in social groups, often in urban environments. They prefer large rocky areas with plenty of crevices, and surrounding trees to climb. They will frequently be seen on rooftops or rock walls.

This species is one of the largest of its genus, and can reach 4.3 feet in total length, with males being slightly larger than females. It is named for the bands of sharply keeled scales on its tail. The rest of its body has rough granular scales. Adults are primarily dull dark grey with some patchy or speckly tan markings. Hatchlings are bright green and they slowly transition to dark grey with age. Older juveniles are a banded mixture of green and grey. It has a row of spiked scales down its spine. It has a narrow, elongated head which is somewhat flat. They do not develop large jowls like the green iguana, but they do have folds of excess skin on their sides.