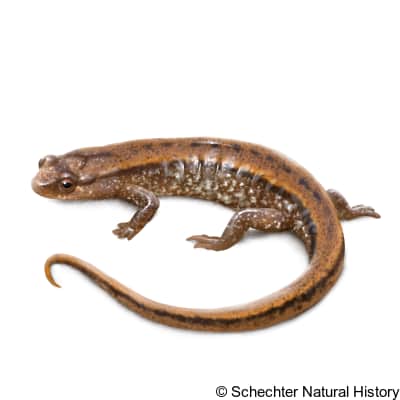 This species is endemic to the United States and is found in states like Tennessee, Georgia, North Carolina and Alabama.

The habitats of the seepage salamander includes freshwater springs, temperate forests and intermittent rivers. It is a nocturnal creature and feeds on mites, crustaceans, nematodes, myriapods, springtails and snails. Oviposition takes place between April and May with eggs ready for deposition by females. Eggs are laid in clutches of 11-14 under cover objects, near streams and moss. After fertilization, hatching takes place within 68-75 days with juveniles resembling adults.

The length of the seepage salamander or Desmognathus aeneus ranges from 1.75-2.25 inches. Its tail is rounded and terete. This species also possesses a pale dorsal stripe that ranges from yellow to tan or reddish brown. The strip may be flecked with a darker pigment. There is a Y-shaped mark on the head and a mid-dorsal line. Another feature of the seepage salamander Is that it is lungless and respires through its skin.