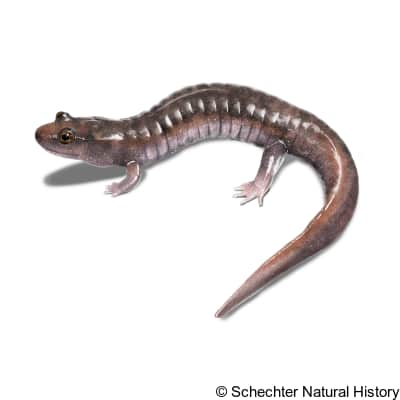 They live in swampy, mucky, wet places in floodplain sloughs and swales of rivers, pond margins and larger streams. They are also seen under logs and decomposing leaf litter at the edge of water. They are nocturnal and when exposed, they escape into the water or into crayfish burrows. Larvae are found in shallow water along edges of swamps. When its September, Females lay a cluster of about 6-20 eggs under logs and debris, the eggs then hatch in October or November. They often feed on terrestrial invertebrates like earthworms, ground beetles, spring tails, and other amphipods.

It has a length of 12 cm and stouter hind legs. Its skin colour is dark brown to black, with the sides freckled with white, with a patch of light brown to reddish pigment, reaching from the base of the eye to the corner of the mouth. The belly is coal black, with white and silver blotching. Also, it has 2 rows of small round light spots which shows along the upper and lower sides, between the foreleg and hind legs, with both rows continuing to the tail. The larvae are about 13mm with bushy black external gills.