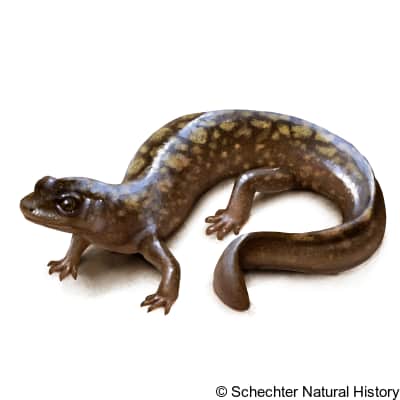 The Shovelnose Salamander is endemic to the Appalachian Mountains in the South-eastern region of the United States, spreading over states like Virginia, Georgia, Tennessee, and North Carolina.

The juveniles and adults share similar habitat. They live in well-oxygenated and cool streams with sufficient rocks and gravels. Although, they sometimes climb on land during rainy weather. They depend heavily on flowing streams with rocks because they are vulnerable. They mate at riffle areas of streams and reproduction is aquatic. The eggs are laid under large rocks in fast-flowing streams, either singularly or in clusters. They are nocturnal. They remain under rocks during the day and step out to eat at night. An adult shovelnose salamander feeds on aquatic invertebrates like snails, crayfish and insects. They adopt an ambush foraging strategy.

The Shovel-nosed Salamander is a broad species with a short tail. Adult males are bigger than females, having a length of 50-73 mm It derives its name from the shape of its Snout, which is more square-ended than other similar species in its Genus. Its skin coloration is a dusky-brown, black or grey dorsal surface, with two longitudinal rows of paler small patches and speckles. Its underside is mostly grey.