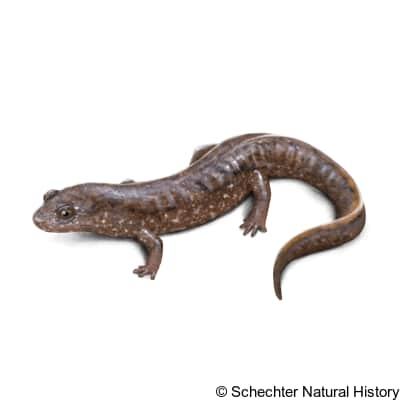 The Desmognathus Santeetlah is commonly sighted at increased altitudes of mountain ranges of the Great Smoky Mountains National Park that graces the border between North Carolina and Tennessee.

They are found only at temperate higher elevations around freshwater springs, seasonal and perennial rivers. This is necessary as they breathe absorbing oxygen with their moist skin since they are lungless and require an effective means of absorbing oxygen. The Santeetlah Dusky Salamanders feed on small aquatic invertebrates. The female lays about 20 eggs on the moss of logs found in streamside vegetation. Mating involves elaborate courting described as a tail straddle walk. Its hatchlings emerge with external gills briefly surviving as aquatic larvae before growing into adult salamanders in a year and achieving sexual maturity in about one or two more years.

The Santeetlah dusky salamander is a medium-sized salamander that varies from light brown to dark brown coloration. Their bellies are often lighter with a yellow wash, possessing an evenly keeled tail with salt and pepper patches on its sides. It grows between 2.0 to 4.0 inches in length having a brown dorsum. It also possesses a yellow line from the eye to its jaw angle.