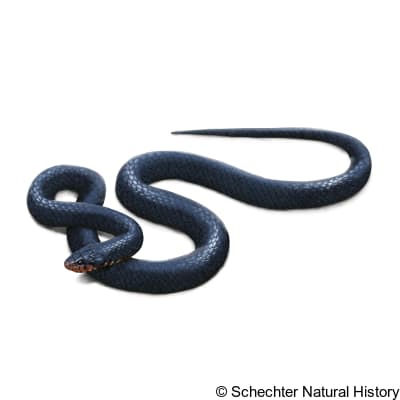 The eastern indigo snake is found mostly in Florida and southern Georgia. They used to be found throughout Alabama, Texas, Mississippi, and South Carolina but are now rare due to habitat destruction and killing.

These snakes can be found in a variety of habitats including, dry prairie, freshwater marshes, coastal dunes, high pine, scrubby flatwoods and habitats altered by humans. However, they thrive the most in wetland areas. Their habitat is often shared with gopher tortoises because they use the tortoise burrows to shelter. They also shelter in hollowed root channels, hollow logs, and burrows of other animals. Breeding for these species occurs from November to April. Females lay their eggs in gopher tortoise burrows (or similar) or fallen logs. They usually lay clutches of 4-12. When it comes to feeding, they also have a variety of diet; they eat frogs, lizards, fish, eggs, birds, mammals, and other snakes.

This species boasts the largest species of snake native to the United States and the largest, non-venomous species in the southeastern regions of the United States. They reach an average length range of 60-84 inches. They are uniformly black or bluish-black, including the belly. The only exception to this uniform color is the side of the head, chin, and throat which is red or cream-colored. These snakes are sexually dimorphic because the males are larger than the females. Juveniles are similar to adults except they have more red on their heads and a white band around the body.