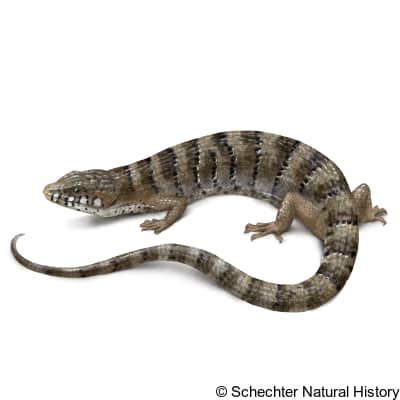 The Madrean alligator lizard can be seen in southeastern Arizona and southwestern New Mexico, United States, down into northern Mexico.

The Madrean alligator lizard occupies a large variety of terrain which includes semi-desert grasslands, woodlands low valleys, Rocky drainages, foothills and moist areas. They are often associated with areas with leaf litters and dead plant material. The diurnal and crepuscular creatures hibernate during cold months. When attacked, it is capable of shedding its tail. Unfortunately, the new tail is not as exquisite or as long as the original. It feeds on a variety of insects such as caterpillars, grasshoppers and moths as well as scorpions. They are oviparous and the females are capable of storing sperm which arrests embryonic development during cold months. They lay a clutch of about 15 eggs.

The Madrean alligator lizard is a shiny and smooth lizard with a long torso, small limbs and a thick long tail that is twice the length of its body. The 5.5-inch lizard is gray or tan with red-brown to dark brown stripes on the back. The underbelly and back are covered with stiff large rectangular scales that boost bony plates. A fold of skin runs along both sides of its lower body from its mouth to its limb and it is covered with small scales. These folds of skin are vital to its existence as it allows the body to ingest prey, develop eggs and expand while breathing. The sexes are distinguished by a large head and striking patterns on the dorsal region of the males while the females have a relatively dull dorsal pattern. The juveniles are marked with distinct white and black patterns on the body and tail, white spots on the lips and dark limbs.