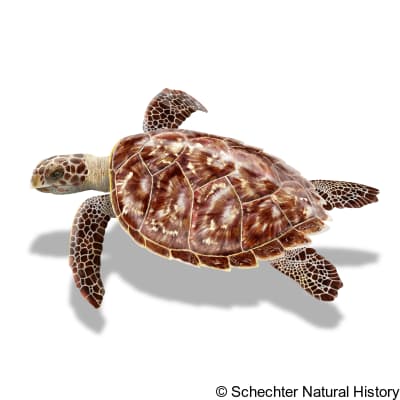 Eretmochelys imbricata have a relatively wide and circumglobal range, but can be found majorly in the tropical and arguably the subtropical regions of the Pacific, Indian and Atlantic oceans. These turtles are migratory and some may take complicated movements through different geographic habitats in the course of their lives. For nesting, the hawksbill turtle has sites in at least 70 countries.

The turtles thrive in the tropical coral reefs littered with sea sponges. You can find them resting in caves and ledges around the reefs during the day. Shoals with brown algae, oceanic island lagoons, and continental shelves. Generally found in water that isn’t deeper than sixty feet. Young hawksbill tortoise can’t dive deep into water, so live in masses of floating sea plants until they develop stronger swimming limbs. While omnivorous, the hawksbill tortoise feeds primarily on sponges including bioluminescent ones. Although, they are highly selective of what sponges to eat. They also prey on jellyfish, sea anemones, mollusks, and crustaceans.

The Hawksbill sea turtle is a relatively small species of turtle; the average length range and size are 24.61 to 44.88 inches and 80kg respectively. The carapace of the turtle has a tangerine background pigmentation with dark and light irregular markings, and mottled-brown, black colors spreading to the sides. The rear margin of the carapace looks serrated because of the way the scutes overlap. The head of the hawksbill tortoise tapers into a ‘V’ shape very akin to a bird’s beak – which is what earns the name ‘hawksbill’. The head also has two pairs of prefrontal scales and two claws on each forelimb. The males have brighter colors, a more concavely shaped plastron, longer claws, and a thicker tail. The juveniles possess a heart-shaped carapace and as they mature, the carapaces begin to grow longer.