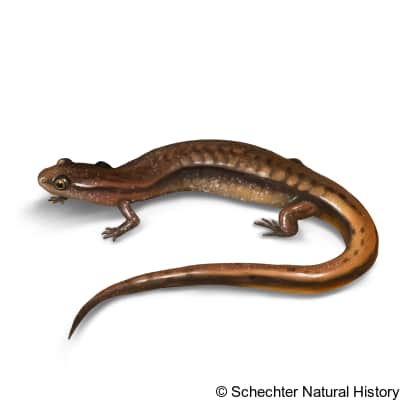 The Hillis dwarf salamander ranges from eastern Georgia, west through the southern half of Alabama and into the central panhandle of Florida. They spread from piedmont to the coastal plains in eastern and central Georgia and extend deeper into the Chattahoochee river drainage.

The hillis dwarf Salamander dwell in bay swamps, the periphery, the upper end of beaver ponds, isolated wetlands, and lazy first-order streams. They derive shelter and moisture from Sphagnum moss. The larvae of the hillis dwarf Salamander dwell in flowing waters just near the adult habitats. The adults presumably feed on small terrestrial invertebrates like insects, spiders, ants, and beetles, while the larvae feed on small aquatic invertebrates. Their reproductive pattern hasn’t been discovered yet, but gravid females have been found in march, implying that meeting should take place April or May, with newly born larvae, coming out by June.

It is a tiny species, having a total body length of 2.8 inches. Their skin pigmentation consists of a bronze or coppery-brown dorsum and sides, separated by a chocolate-brown stripe that runs through each eye, and white or grey flecking. It may have a herringbone pattern on its back. Its belly and anterior undersides are bright yellow. It has 4 toes on each limb.