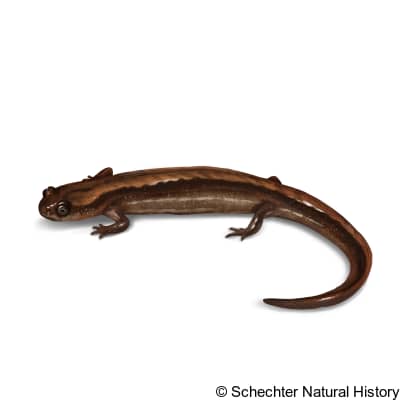 The coastal plains dwarf salamander is a species of salamander, endemic to the Southern United States, from North Carolina, Oklahoma, south to the state of Texas along the Gulf of Mexico  to Northern Florida.

The coastal plain dwarf salamander is naturally adaptable to swampy pine woods. It is mostly active at night and spends most of its time under leaf litter or forest floor debris. It may also be found around swamps and bottomland hardwood forests, frequently encountered in seepage areas around ponds and streams. The eggs hatch during march and females attain sexual maturity 8-9 months after hatching. They breed during fall, with the females laying 12 to 48 eggs singly or in small clutches attached to submerged debris in shallow or still water. The larvae are benthic feeders but mature species feed on small vertebrates, zooplanktons, and insect larvae. They are diurnal feeders.

The Coastal plains dwarf salamander grows from 2 to 3.5 inches in length, having a slender body and a long tail. It is yellow-brown in color with darker brown blotching and dark stripes down each side, but the pattern and coloration can vary widely within the some species. It’s scientific name denotes that each of its feet has four toes.