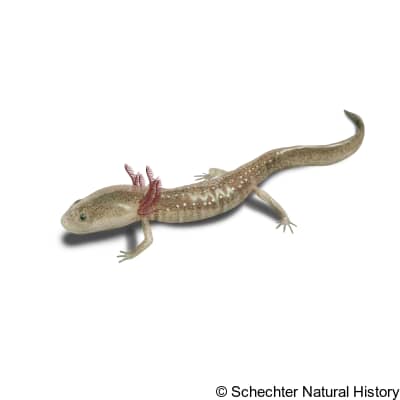 This species of salamander is found in Texas. It is endangered and not widespread. It earned its name by first being discovered in Barton Springs of Zilker Park in the Texas capital, Austin.

They can be spotted in clear waters and spring openings where there is plenty of food and constant temperature (usually at 68 degrees Fahrenheit). The Barton Spring Salamanders can also be found under gravel and rocks very close to spring outflows and within aquatic vegetation. They can be found in water as deep as 0.1 to 5 meters. The salamanders feed on tiny aquatic crustaceans (amphipods) who share the habitat with them. Gravid females are known to be able to retain eggs for up to twelve months. Due to the translucent nature of its skin, sometimes eggs can be seen in the stomach of the females. Clutch size can be up to 40 but younglings have a high mortality.

The salamander is slender with long limbs. It averages about 2.5 inches in length. It has got a tiny narrow head and very small, reduced eyes. Though the eyes do have a golden iris and black mottling. The colors of the salamander vary and may appear gray-brown, dark gray, plain gray, purple-gray or even yellowish brown (“salt and pepper effect”). The color varies but the younger salamanders are darker. The salamanders have three pairs of red gills, four fingers on each hand, five toes on each foot and are entirely aquatic.