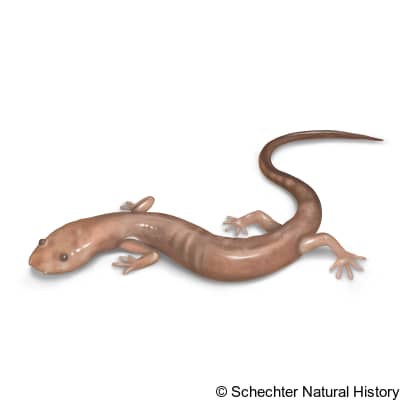 This specie can be found in caves and caverns throughout the Ozarks. They are identified from at least 120 different sites in Arkansas, 43 in Oklahoma and 25 in Missouri.

At the larval stage, the grotto salamander resides in springs and streams close to cave entrances. At maturity, they then migrate to deep into the caves themselves and live out their lives underground. This specie prefers waters between 5.5 and 16.5oC. Their diet comprises of small, cave-dwelling invertebrates like the Gammarus, although they are also known to feed on guano. Mating occurs from late spring to summer. Laying of eggs then occur from late summer to fall and they lay clutch size of about 13.

At maturity, this specie can grow up to 135 mm in total length while its larvae tend to range from about 10 – 30 mm. This salamander’s larvae are also bold in colouration. They are usually brownish or purplish-grey, and occasionally with yellow flecks on its sides. They possess a distinct high tail fin with external gills. Its larvae also have functional eyes and can live outside of caves in brooks and streams. The larvae metamorphose after two to three years. At this point, they lose their gills and their eyelids fuse shut or at least partially shut. The now bling adult specie spends the rest of its life in a cave. This adult form of this specie is pinkish white and occasionally with traces of orange on its tail. These traces are also on its feet and sides. It also has 16 – 19 costal grooves. This salamander is the only cave salamander that undergoes metamorphosis.