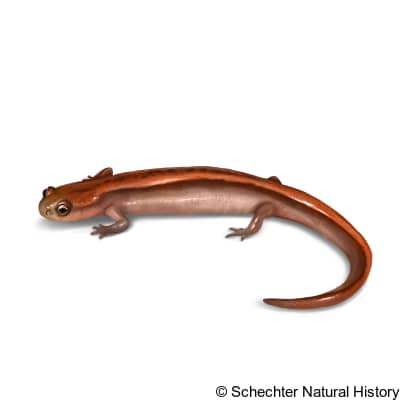 These species can be found in the range of the Gulf Coast in Mississippi, Alabama and also in the western regions of the Florida Panhandle. It occurs in close proximity with E. quadrigitata, reports have claimed to have spotted the two species on the same hillside in different microhabitats on Eglin Air force Base in Santa Rosa and Okaloosa counties.

They are brook salamanders and can be found in freshwater springs and brooks. The Bog Dwarf Salamander can be found at the sphagnum covered floor of a steephead seepage. Like others of their genus, they feed on small arthropods such as spiders, Armadillidiidae, and insects. Larvae also eat these invertebrates.

The genus of this salamander points them out as brook salamanders. They are slender with correspondingly slender limbs each with three numbers. These salamanders are tiny with a total length of approximately 4.5 in (including tail). It lacks a pronounced neck and its body tapers into its long tail. The tail is easily more than the length of its entire body. It has bulbous eyes on its blunted head. Their general colors are often dark honey-brown to light brown. Some specimens display a long dotted dorsal line that stops where the tail starts with darker color bands running from its mouth on either side to the end of its tail.