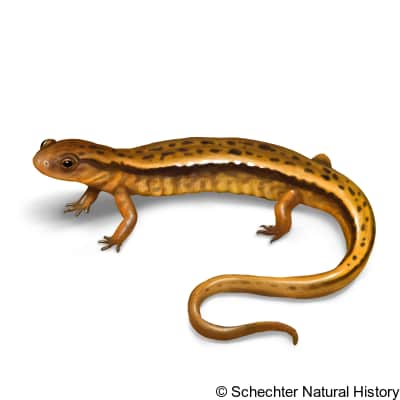 It is endemic to North American Nearctic region predominantly. The Blue Ridge Two-Line salamander’s range includes southern Appalachian Mountains; the Blue Ridge Mountains, Cumberland Mountains, and the Cumberland Plateau. In the United States, they can be found in North Carolina, South Carolina, Tennessee, Georgia, and Virginia.

The E. wilderae can be found in terrestrial habitats (forests) or aquatic habitats (streams) based on what season or what time of the breeding cycle it is. When on land, you can find them in damp locations like underneath logs or rocks. They return the stream to mate in winter and females would lay eggs in water on the underside of rocks and logs. The eggs are laid from the beginning of the year to the middle of summer with varying clutch sizes; some lay 28 – 56 but there are reports of clutches as large as 87 eggs. E. wilderae feed on many types of aquatic invertebrates such as chironomids, nematodes, and copepods and on land they eat insects.

Slender with a length of 2.75 – 4.21 in, the Blue Ridge two-lined salamander has a tail that takes up to 60% of its total body length. Their skin coloration is yellow-orange with two dark stripes that run from each eye to the end of the tail. Between the pair of stripes, there are black spots that bedeck the space from nose to tail with these irregular black spots on the sides as well. E. wilderae have nasolabial grooves under the nostrils because they are a lungless type of salamander. Coastal grooves number vary by elevation; specimens at below 1200 meters have 14 while the others above have 15 or 16. The nature of the cirri and the size of the hedonic glands help determine sex. The larvae are yellow and have a dorsolateral stripe.