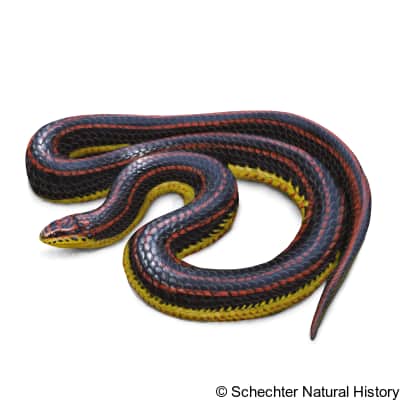 This specie is fond of aquatic habitats. They tend to like ecosystems like swamps, marshes, wetlands, streams, lakes, ponds, rivers, and creeks. Within these habitats, they stay beneath fallen trees, in rotting logs and stumps. They also inhabit forests, mountainous regions, and burrow deep underground. They are mostly active at night and less in the day which makes them nocturnal. When it is captured, the snake is practically harmless. Their diet consists of frogs, worms, fish, salamanders, and tadpoles when it is young. When mature, they exclusively feed on the American eel. The breeding season comes and males fight to breed with the females. They lay a clutch of 10 – 52 eggs underground and these eggs hatch 2 – 3 months later.

They range from 36 – 48 inches but there have been sitings of lengths up to 66 inches. Their upper side is a lot darker and less colourful than its underside. Their scales are brown, red, yellow and green, hence the name. Its upper side is dark brown or black with red stripes. Then its underside is yellow, red and green.