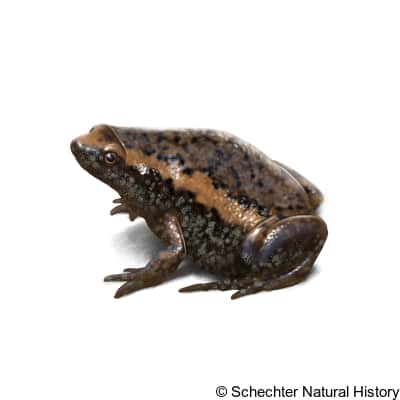 Ranges throughout the southeastern United States; as far north as central Missouri and southern Maryland, and as far west as central Texas.

A terrestrial species that lives in moist, shady environments in a variety of habitats. It requires lots of ground debris for hiding, and soft damp substrate for burrowing. It can be found in woodlands, swamps, suburban and urban areas.

This unique species is not a true toad, but rather a microhylid frog. It has a very small, pointed head with no discernible neck, and a thin fold of skin across the head, just behind the eyes. It is small, only growing to a length of about 2 inches, and it has an egg-shaped body when viewed from above. Its front legs are thin and small compared to its hind legs, and its body is somewhat flattened dorsoventrally. It has moist skin covered in small bumps, and comes in a variety of brown or reddish shades with speckling or blotching patterns. This species does not have a tympanum, but it does have hard growths ("spades") on the heels of the hind feet for burrowing.