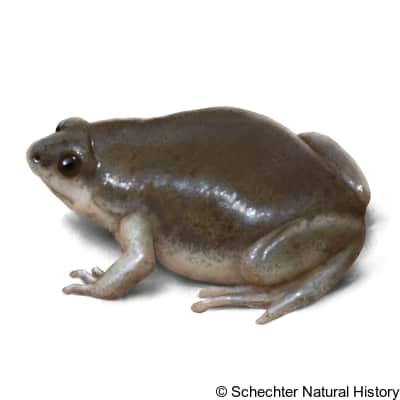 The western narrow-mouthed toad is a species of microhylid frog, which can be found all over the south-central United States of America, ranging from Nebraska south through Texas and into northern Mexico.

Both Juveniles and adults are terrestrial, nocturnal and secretive. They can be seen in burrows, rocks, mud cracks, tree bark, and log, all of which are usually close to the water. They are often called ant-eating frogs because they feed highly on ants and live close to ant colonies. They also feed on beetles and other insects. During spring and summer, it breeds in pools of water, left by rainfall. Females lay at least 650 eggs and 2100 at most, these eggs form clusters of 100-200.

It is a small and flat-bodied species, with an average length of 1.5 inches. It has a sharply-pointed snout with a skin pigmentation of olive-green to grey-brown, with dark blotching. There is a lighter coloration on their undersides. Their skin is capable of secreting glands that can cause severe pain if it touches the human eyes. One can identify an adult male species with the presence of a dark and distensible throat patch.