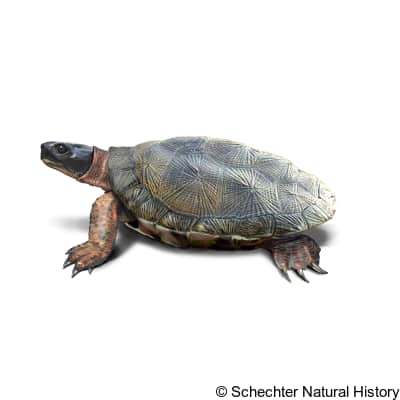 The wood turtle can be seen in most New England States, Nova Scotia, West to Michigan, northern Indiana, and Minnesota, and south to Virginia. It is Endemic to North America.

It dwells in slow-moving streams with a sandy bottom and heavily vegetated banks. The soft bottoms and muddy shores of these streams are what they use during Overwintering. Also, the areas bordering the streams are used for nesting. It spends Spring to summer in forests, fields, bogs, and beaver ponds. They are oviparous. Females build nests on land for their young and cover with leaves to protect them from predators. They are mostly active during the day and they go into hibernation from November to February. Males are often aggressive and older turtles seek dominance. They are omnivorous as they feed on millipedes, slugs, mosses, and grasses.

Wood turtles grow a straight carapace length of 14 and 20 cm. It has a rough carapace that is a tan, grayish-brown or brown color, with a keel made up of a pyramidal pattern of ridges and grooves. Older turtles have abraded or worn carapace. They weigh 1 kg when fully grown. Its ventral shell is yellowish with dark patches. The upper surface of the head is dark gray to solid black, sometimes, speckled with yellow spots. The ventral surfaces of its neck, chin, and legs are orangish-red with faint yellow stripes along the lower jaw. Males are often bigger, having larger claws, a larger head, a concave plastron, a more dome-like carapace, and longer tails than females. The plastron of females and juveniles is flat while its concave in male.