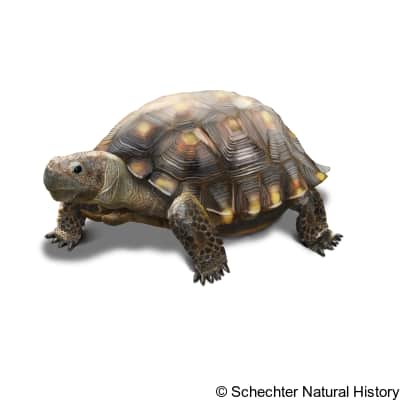 The Berlandier’s tortoise, or more popularly called, the Texas tortoise has a range in the United States that is confined to southern Texas including Del Rio and San Antonio. Further south it can be found in Mexico in the states of Coahuila, Nuevo León, and Tamaulipas.

Grassland and savanna-like terrains are the typical habitat for the Texas tortoise because of their high tolerance for dry climate. They can also be found seeking shelter in bushes and brush. These species can dig burrows but prefer to use other previously dug mammal burrows to reside. They also show a preference for dry sandy soil and open scrub woods. They feed mostly on weeds, cactus fruit, and grasses. These tortoises are generally herbivorous but can eat small invertebrates like snails and insects. Stranger diets include fecal matter and animal bones. Egg clutches are laid once or twice each year, with a clutch consisting of about two or three eggs that are laid in a depression in the ground. Eggs hatch in 88 – 118 days.

Of the four species of tortoise, the Berlandier’s tortoise is the smallest with an average size of 8 – 10 inches as adults. It has on its rounded carapace, a dark brown coloration with beige highlights on the pleural and vertebral scutes. The plastron shares the same dark brown color. However, head, limbs, and neck vary a bit more and can range in colors from tan to dark brown. Black scales at the bottom of the feet and on the front of the limbs are evident in some specimens. Mental glands are visible in adults on their lower jaws. Juvenile tortoises appear lighter in color with more obvious patterns that darken with age.