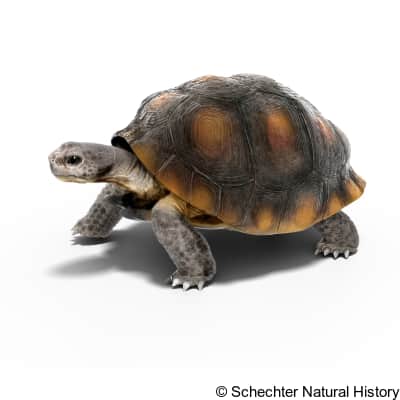 They occur along the southwestern border of the Colorado River and at elevations ranging from sea level to 5000' across the state of Arizona.

It inhabits mountain slopes, hillsides, canyons and other rugged uplands. It is entirely terrestrial, shelters and hibernates in burrows it dug with its forelimbs or naturally occurring openings under rocks. They are diurnal and crepuscular. When threatened it hides its head and body in its shell covering the opening with its forelimbs. They are herbivores feeding on herbs, grasses, tree shoots cacti and other available plant materials. They are oviparous, mating between June and August and lay a clutch of about 12 eggs which are buried in a burrow a year later.

The Morafka dessert Tortoise is a big land tortoise with a shell measuring 15 inches. Its carapace shaped like a dome is marked by growth rings. Its color ranges from orange-brown, dark gray, grayish brown and almost black. Its underbelly is yellow or tan and it has a short tail. Its limbs are stocky, round and short. Its forelimbs are flat and well adapted for digging. They are armored with large thick scales and longer than the back limbs. Its head is rounded and small. An extended gular shield from the plastron distinguishes the males from the females.