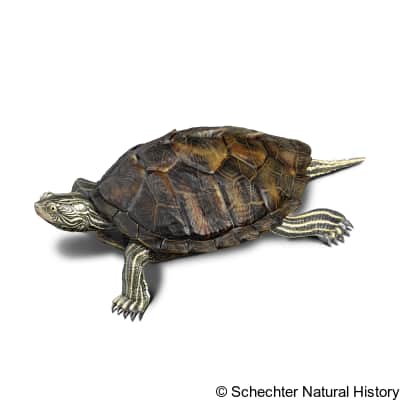 Range branches throughout the northeastern and midwestern states, into southern Ontario and Quebec. It is most prevalent in areas surrounding the eastern Great Lakes, and southward throughout Ohio, Indiana, and most of Kentucky and Tennessee. It is also found in most of southern Michigan, northern Illinois, along the northern Mississippi River, and southwest into southern Missouri, most of Arkansas, and adjacent areas of Kansas and Oklahoma. In the northeast, it has patches of range in eastern Pennsylvania, New Jersey, southern New York, and Vermont.

Northern map turtles inhabit large bodies of freshwater with lots of logs and floating debris for basking. They prefer rivers over ponds and lakes, and are more likely to be found in smaller rocky streams in the southern and western parts of their range.

This aquatic species is named for the map-like pattern on its carapace; an irregular network of thin connected lines that are typically yellow or orange on an olive brown background. This pattern is more vibrant in juveniles, and fades with age. The turtle's skin is dark olive or black with a pattern of many thin yellow or greenish stripes, which are thinner around its face. Its upper mandible is pale yellow around the edges of the mouth. Its plastron is yellow with a central blotchy pattern along the scute seams, which fades away with age. The central carapace scutes are peaked to form a keel down its back, which is more pronounced in juveniles. The scutes on the posterior edge of the carapace are flared and serrated. tern