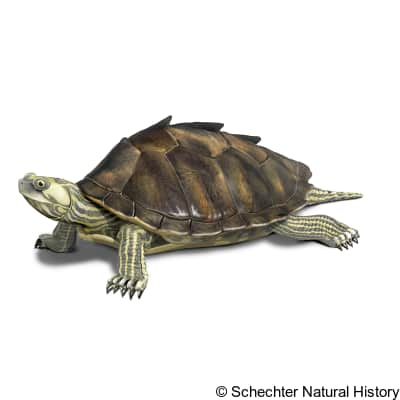 Rare and endangered, the map turtle can only be found at the southwestern corner of America. In eastern Louisiana, across Mississippi, Alabama and Georgia in the Tallapoosa and Coosa rivers.

The Alabama Map Turtle can be found in sandy or muddy streams and rivers. Can also be found in streams with rocky bottoms. The males and juveniles can be founding basking in the sun on treetops near the banks. Females are generally found basking on larger trunks instead of limbs and branches. The Alabama map turtles are omnivorous and feed on both small animals (insects, mollusks) (invertebrates) and vegetation. Although the male carry sperm throughout the year mating only occurs in autumn. The females can lay eggs up to 200m away from the ocean.

It might prove difficult to differentiate this turtle from others of the same genus. A black stripe running down the center of its back with knobs extruding from it is one of such differentiating features. The shell covering the belly is lightly colored with five horizontal lines that outline the scutes. The neck and legs can range from green with patterns of thin yellow lines. It also has webbed feet and a striped tail. Adult males range from 3.5 inches to 5.0 inches while females are much larger and have huge heads. The females lose a lot of colorations and markings as they age and may appear more somber than males and juveniles. The upper half of the shell color can range from olive to a dull green and much less visible black stripe in adults compared to juveniles. Juveniles have a more olive upper half of the shell and a dark stripe. The outermost edge on the carapace (or upper half of the shell) usually has light reticular marks.