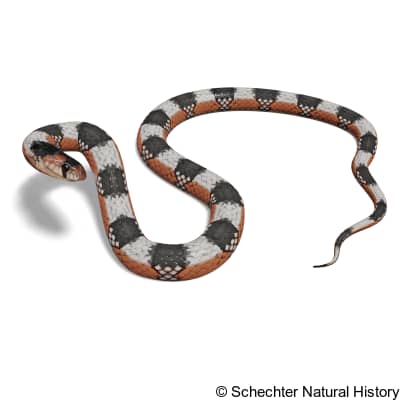 This species is found in extreme South-central Arizona in Southern Santa Cruz County of the United States and in Sinaloa, and the east-central part of Sonora in Mexico.

The thornscrub hook-nosed snake is nocturnal and hides underneath rocks or is buried in the soil. Rolling mesquite-covered hills and oak-lined drainages are amongst its habitat. The diet of this species consists of centipedes and spiders. Although little is known about its reproduction, Gyalopion quadrangulare are oviparous with the females laying eggs in clutches, with each clutch containing about 6 eggs.

The thornscrub hook-nosed snake has a total length up to 12 inches. It has a dorsal coloration of black saddles on a cream-off-white background. The black saddles interrupt a wide red or orange stripe present on each side of the body. The black saddles on the dorsal surface are solid and rectangular and taper to a point on lower sides. This species has a ventral color that is white or cream-colored. The upturned snout is the most distinguishing feature of the hook-nosed snake. The snout has a concave rostral scale as opposed to the keeled rostral scale of the hognose snakes. It has a round pupil and the scales are smooth and shiny. The dorsal scales are usually arranged in a row of seventeen at mid-body. The tail has a dorsal pattern of 19-55 black blotches that are rectangular.