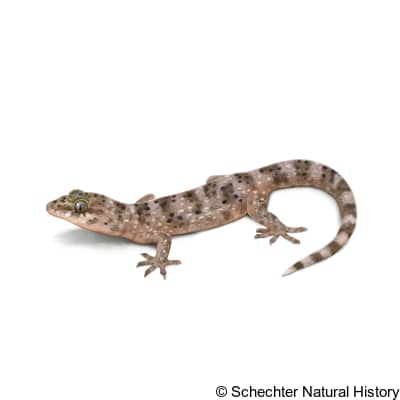 Native to almost all coastal areas surrounding the Mediterranean Sea, but it has been introduced to many places outside of its native range. It is established throughout much of the southern United States and Mexico. It's been found as far north as Chicago and New York City.

This species thrives in human habitation. It has successfully established itself all over the world wherever the climate is similar to that of the Mediterranean. It likes to hide in small crevices of man made structures, and will often hunt insects around artificial lights. It is strictly nocturnal, and most often seen clinging to vertical surfaces.

This small gecko averages 10-13 cm in total length. It is primarily pinkish white with dark grey spots all over its body. These spots merge into bands on the tail, break up into speckles on the head, and become faded on the limbs. It has raised circular bumps all over its dorsum, except for its face and the end of its tail. It has large eyes with vertical pupils. Its ventrum is white and unmarked. Like most geckos, it has enlarged pads on all of its toes for gripping on almost any surface.