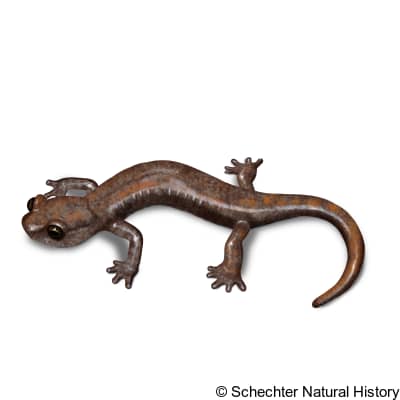 The Wintu Shasta Salamander is native to the United States; precisely, Shasta County in California.

Wintu Shasta Salamanders are forest-dwelling creatures. They are in fact, diurnal and so spend quality time perching and climbing cliffs, walls, oaks but most specifically, live in damp caves and crevices. They are regarded as excellent climbers because of their strong ability to climb on slick and sheen surfaces. These salamanders are insectivores but also, feast on other small invertebrates. After regular mating sessions, the females lay and shelter eggs in damp crevices, after which the egg is hatched. Unlike relative species, as larvae, the Wintu Shasta Salamander does not brood nor live in water bodies. This salamander, although terrestrial, lives in moist areas basically because of its system of respiration whereby breathing is done through cells and the skin. Notably, they do not dwell in water but can thrive for a little period of time when they eventually find themselves in water. These animals communicate by lifting the head and tail, deliberately shrinking its body, discharging skin fluids, firmly rolling the body and tail, etc. especially as escape mechanisms.

Wintu Shasta Salamander is a relatively small but full-bodied salamander. It is able to develop and measure up to 11cm in total length. Although the entirety of the body is flattened, it is not as flat as similar species and because of the back structure, the body appears elongated and block-shaped. The long and fleshy tongue can stick out up to 6cm from the tip of the mouth. The legs are fairly long and fold when clasped to the trunk. They have a short, narrowed, and edgeless tail. The feet are long, well-developed, and are webbed towards the base, hence its common name, Webbed-toed salamander. Generally, the base coloration ranges from sheen brown to gray with yellow or red markings above while the underside is usually gray.