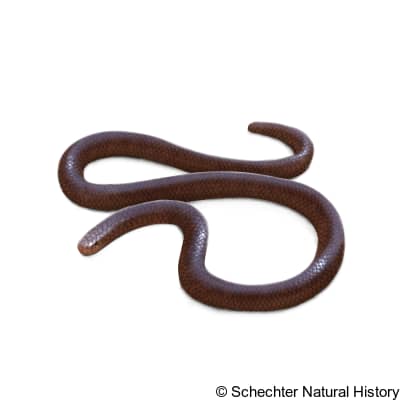 The Brahminy blind snake is native to the continents of Asia and Africa, Although, they’ve been spread across other parts of the world like the Americas, Australia and Oceania, with a major population in Florida. Major countries where they’ve been discovered are; Egypt, Kenya, Tanzania, Sri Lanka, Vietnam, Singapore and many others.

They live underground in the nests of termites and ants. They are also discovered under logs, rocks, humus and even abandoned buildings. They feed on the larvae, eggs and pupae of ants and termites. During reproduction, up to 8 offspring can be produced and they are always female offspring with identical genes. Their behavior varies from sluggishness to activeness. The energetic behavior is portrayed when they quickly seek for soil or litter to avoid light.

An adult Brahminy blind snake measures between 2-4 inches, with rare species as long as 6 inches. Unlike other snakes, their head scales and body scales are similar. They have really tiny eyes that are barely noticed. The eyes are covered with translucent scales which renders them almost blind. Although, they can register light intensity, the eyes cannot form images. Their tail has a small pointed spur at the tip. It has 14 rows of dorsal scales on its body, with a pigmentation that varies from silver-grey, purple, albino and yellow-beige. The baby brahminy blind snake has similar skin pigmentation with the adults.