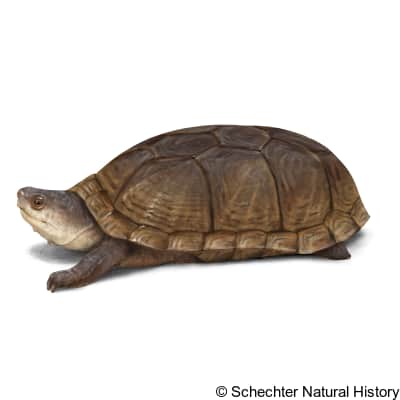 It is typically found in Midwestern United States and north of Mexico.

Research conducted recently has observed that they venture unto land as well as water. They can generally be found in bodies of temporary waters, particularly with soft muddy bottoms such as ponds, canals, rivers, wetlands and ditches. On land, they generally dig burrows. Their diet typically consist of marine insects and animals such as fish, slugs, carrions, mollusks, worms and snails. They also feed on aquatic plants and animals that attempt to enter into their burrows during latency. In winter, yellow mud turtles bury themselves in mud. Mating and courtship typically occurs between April and May. The yellow mud turtle usually lays about 6 to 8 eggs. The eggs are hatched sometime between August and September.

They are very small sized. They can be yellowish- green, brown or tan in color, tinged with black. They range from 10cm to 15cm. The males are moderately larger than the females. They have rather large heads, marginal shields and throats that are yellow in color.