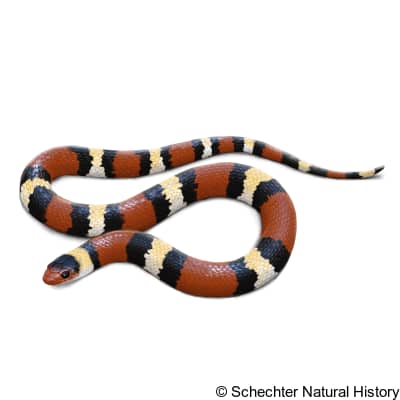 The scarlet kingsnake can be found in the Eastern and southeastern areas of the United States. Mainly in Florida, eastern Louisiana to Southern New Jersey, Alabama, North Carolina, South Carolina and Georgia.

The scarlet kingsnake dwells in areas with an ecosystem of pine savannas, pine flat woods, hydric hammocks, prairies, cultivated fields, mesic pine-oak forests and suburban habitats. They are terrestrial burrowers who live under rocks, inside logs, and in the bark of standing dead trees. They are often found hiding in shrubs or even a pool in suburban neighborhoods. The scarlet kingsnake is nocturnal and active mostly at night. They are extremely fast climbers and feed on amphibians especially skinks, rodents and other smaller snakes. The females are oviparous and lay between 2 - 9 eggs and the gender of the hatchlings is determined by the temperature of the eggs.

The adults grow to between 14 and 20 inches. The longest recorded length is 27 inches. The nonvenomous snakes are distinctively covered with triple colored rings of black, red and yellow which encircles its entire body. Both the red and yellow rings are bordered by a black ring. In its young, the yellow rings may be white. The scales are generally smooth and its pupils are round. At midbody, it has dorsal rings numbering 19. They are the smallest snakes in their species.