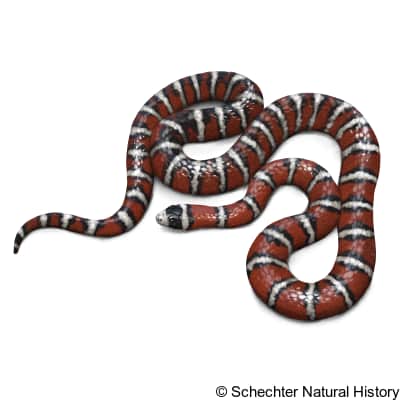 The Arizona Mountain Kingsnake has a discontinuous range stretching from the farthest northwestern corner of the state, across the central mountain ranges and the Mogollon Rim, into the “sky island” mountain ranges of the southeast within Arizona. It can also be seen in the wooded areas in Chihuahua and Sonora, Mexico, and north through central Arizona.

It occupies communities ranging from Interior Chaparral up through the highest elevations of Petran Montane Conifer Forest. They range from central to southeastern Arizona. Also into Mexico, and some parts of Utah and Nevada. The Arizona mountain kingsnake is often found on heavily wooded, rocky slopes or in steep canyon bottoms with abundant leaf-litter, fallen logs, and rocks. They are diurnal but sometimes found out on warm and moist nights. They also hibernate during the cold months. They feed on lizards, rodents, birds and bats. Their mating happens during spring. A clutch of about 9 eggs is laid in late spring or early summer. The hatchlings emerge in late summer.

They are medium-sized snakes of up to 43 inches in length. The Arizona Mountain Kingsnake snout is either white or yellow, and the top of their head is usually black. They also have large eyes on either side of their head. The Arizona mountain kingsnakes are encircled by over 40 rings of white or yellow-white. These circles are bordered by thin black and wide red sections. The black bands begin to be more narrow on the lower sides and most times disappear before reaching the belly of the snake. The head is considerably wider than the neck. The scales of this species are smooth and shiny.