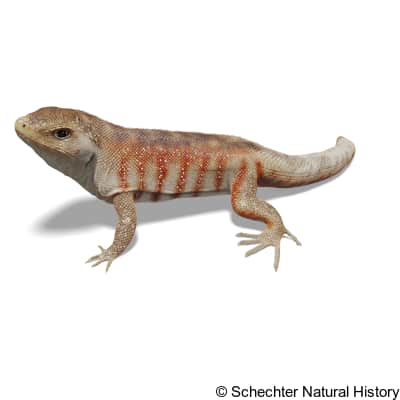 Native to the island of Hispaniola, but an introduced population is established in south Florida.

This species prefers dry habitats with cacti or thornscrub. It likes to hang out on rocks or concrete walls, and will inhabit urban areas.

This thick-bodied lizard has a stubby head and row of short, spiked scales down its back. It will curl its tail into round loops when threatened, but otherwise it stays straight. It is named for the vertical reddish orange bars that develop on its sides in adulthood. Its dorsal scales are keeled, while its ventral and lateral scales are granular. Its back legs lack a distinct pattern, but are generally a greyish tan coloration. These dull dorsal scales transition down its sides to a speckled mixture of turquoise and reddish orange scales, then break into the reddish orange vertical bars, with unmarked pale areas between the bars. It has a wide neck and its throat may be tinted turquoise. On average, it is about 3.5 inches in snout to vent length.