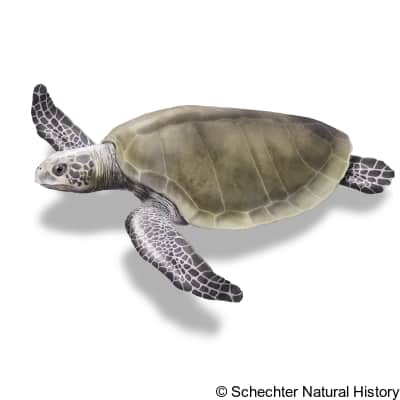 Wide-ranging throughout warm, tropical ocean waters, mainly in the Pacific and Indian Oceans, but also the warmer areas of the Atlantic. Its most northern branches of range stretch to the southern coast of Alaska, and the coast of New England and southeastern Canada.

Typically observed within 15 km of mainland shores. Often found in protected waters that average 22-55 meters in depth. Like all sea turtles, only females come to shore to nest. They may also be found on beaches when sick, injured, or stranded by adverse weather conditions. This species will nest on coasts throughout the tropics, but they most commonly nest on the shores of Odisha, India, western Mexico, and Costa Rica. It nests in large groups called arribadas.

The second-smallest species of sea turtle, it reaches about 2 feet in curved carapace length. It is named for the olive coloration of its carapace, which is rounded and somewhat heart-shaped when viewed from above. Unique to this species, it can have an unequal number of lateral scutes, ranging from 5-9 on each side. It has 12-14 marginal scutes on each side. Like all sea turtles, it has flippers instead of legs, which cannot be pulled into its shell. Each front flipper has 2 anterior claws. It has a large head and thick neck, and a creamy yellow plastron. The ventral surfaces of its skin are pale and the dorsal surfaces match the carapace.