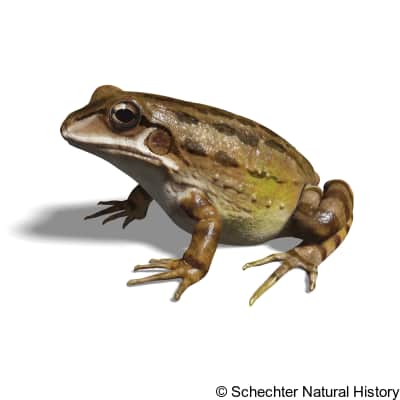 From the southern tip of Texas, down the east and southwest coasts of Mexico, throughout Central America, and into northern South America.

This species is most often found near water, but will inhabit a wide variety of moist habitats. These include savannah, grassland, semi-arid regions, as well as tropical forests, both upland and lowland. It will often hide in burrows during the day.

A small species of frog, averaging only 1-2 inches in body length. It is named for a distinct white stripe on each side of the face and neck, just above the upper lip. Its skin is mildly bumpy and it typically has a noticeable dorsolateral skin fold. It has a moderately prominent hip bone hump on its lower back, and a pointed snout. Its dorsum is grey, olive, or brown with a mottled pattern or distinct darker spots, and dark bands on the hind legs. Its ventrum is pale and unmarked.