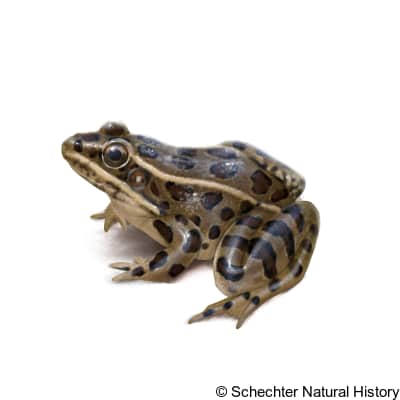 The plains leopard frog is found throughout the great plains of the United States, spreading across Indiana, South Dakota, Colorado, New Mexico, Texas, and Arizona. It is also found in the southern half of Iowa, ranging north along the Missouri River to Plymouth County.

It is found throughout semiarid regions and in or very near a permanent water source like rivers, streams, creeks, and ponds. They are shy animals as they often leap beneath the water when approached. They are active during night-time and they feed on insects and any other animal that they can overpower and swallow, including other frogs. They breed in March or April and a single female may lay between 3000 and 5000 eggs in a round mass.

The plains leopard frog as an average body length of 2-4.3 inches with brown or grey skin pigmentation. They have distinctive and irregular dark colored spotting on their back and one on the snout. It has really strong, long legs, which helps it to make high leaps. It also has 2 incomplete dorsolateral ridges down the back, which is near to the groin. It has spots on the forelimb but has tiger stripes or bars on the hind leg, which are sometimes dark-greenish. The undersides of the groin and legs are pale yellow.