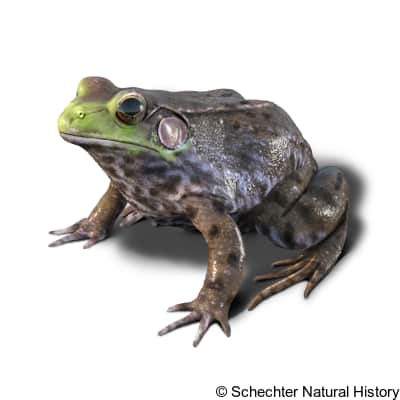 The green frog is highly endemic to North America, with a high concentration in Virginia, Ohio, and Minnesota.

It dwells in shallow freshwater ponds, road-side ditches, lakes, swamps, streams, and brooks. They are sometimes seen ashore but they leap into the water once approached or threatened by fast terrestrial enemies. They are highly aquatic but their young dwell on land when the soil and grass is wet. They are mostly active during daytime, although, their calls are sometimes heard at night, during hotter weather. They breed from April to August. During mating, the male grasps the female with his forelimbs, posterior to hers. The female releases her eggs the same time the male releases sperm. Fertilization happens in the water and a single clutch ranges from a 1000 to 7000 eggs. They are variety feeders as they will attempt to eat any mouth-sized animal like insects, fish, shrimps, other frogs, small snakes, and snails.

An adult green frog has green to brownish skin coloration with blotched legs and back, a body length of 5-10 cm, excluding the hind legs, and they weigh 28-85 grams. The sexes are somewhat sexually dimorphic as the mature females are larger than the males and the males have a wider tympanum diameter and bright yellow throats. The tadpoles have an olive green dorsum and a creamy-white below.