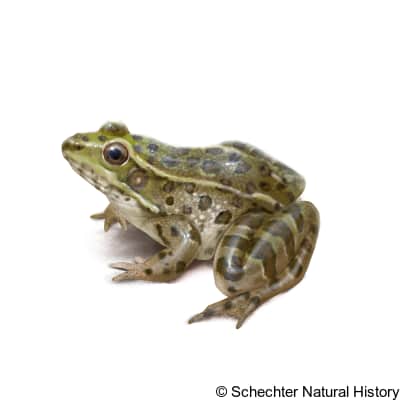 Lithobates fisheri (The Vegas Valley Leopard Frog) was once thought to only occur in the Las Vegas valley of Nevada and surrounding areas, where it is now extinct. Recent studies of Lithobates chiricahuensis (Chiricahua leopard frog) found two distinct lineages, one which was determined to be from Lithobates fisheri. No longer extinct Lithobates fisheri can be found along the Mogollon Rim and White Mountains of central and eastern Arizona.

They were once found in Northern Las Vegas valley, at altitudes of up to 1000-2600m, places associated with springs and trickling streams and surrounding desert isolation. These creatures need permanent water for reproduction and bred throughout July- August. Their eggs are laid in clumps of spherical masses on the water surface and surface water flora and their tadpoles were small and dark-colored. Their diet includes invertebrates like caterpillars and beetles while being preyed upon by bullfrogs, and predatory fish when in water.

This frog is basically of the olive color with variations and patterns in green and olive. The adult frog’s skin is granular on posterior lower aspect of its femur and has an olive color with anterior body usually a brighter green and dark greenish olive to green spots, although these spots are often indistinct on the anterior body and head of the male. It has light stripes along its paired weak dorsolateral ridges, the throat is light green sometimes clouded with dark grayish olive green. The male has nuptial pads while the female has more prominent dorsal spotting. Males can grow up to 65mm, while the female which is larger can measure 46-74mm in length. Its hind feet are 2/3 webbed and the heel of the extended limb falls considerably short of its snout tip. Its tympanic disc has a vertical diameter greater than the distance between the nostrils and the eye. It has vomerine teeth between choanae.