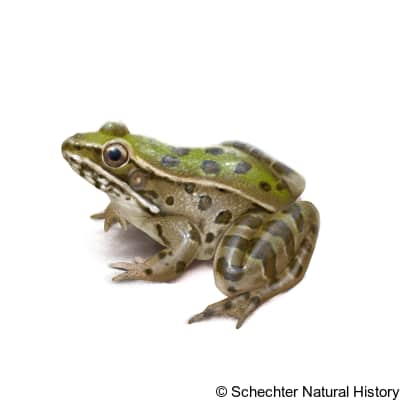 It is a native of Florida and also thrives in southeastern parts of United States like Texas, Iowa and New York, United States of America.

It lives around shallow freshwater bodies lie bottomland swamps, floodplains and slightly brackish ponds in hardwood forests. It also thrives in man-made ponds, canals and ditches. Its breeding season occurs from November to March in the southern part of the range and for those in the northern part of the range, it occurs around March- June. It goes down to slightly brackish, or just still shallow water to mate and lay eggs, and the female can lay up to 1,500 eggs at a time. These eggs which are laid in clusters of hundreds just below the water surface eventually hatch into tadpoles. Its tadpole takes an average of 90 days to fully transform to a young frog of about 20mm long. They dine on insects, crayfish and other small invertebrates and in turn are food for many snakes, otters and occasional herons.

Possessing a classic frog shape, this frog can be identified as being a true frog. It color is of variations of green to brown and the skin has dark leopard-like patterns with a pair of prominent dorsolateral light colored ridges which extend from their eyes to groin. Its tympanum is about the size of its eye and is seen as a dark circle with a light spot in the center. It has a slender shape with long legs, growing up to 20 – 130mm in total body length, and all its feet are webbed. It is sexually dimorphic as its male is always smaller than the female.