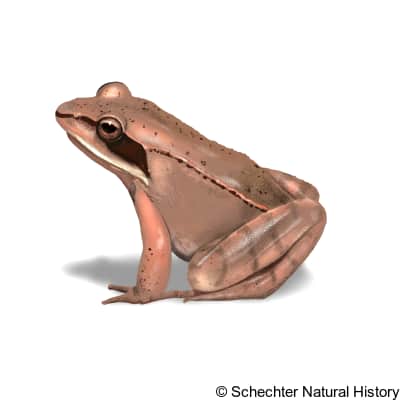 Northern Alaska to Labrador, Canada. In the continental United States, can be as far south as northern Georgia and as far west as northern Idaho. Some distribution south to northern Colorado and in Arkansas-Missouri. Only frog that lives north of the Arctic Circle.

Commonly inhabit wooded areas, tundra, wet meadows, or bogs. Especially frequent the edges of streams or ponds and willow thickets. When inactive, they hide in logs or under leaves or rocks. During the winter, they can endure freezing of up to about 65% of blood and other extracellular body fluids unharmed. Eggs are laid in vernal pools or other fish-free ponds. Predators include raccoons, snapping turtles, skunks, coyotes, birds, and foxes.

Marked across both eyes with a dark stripe that resembles a mask. Has relatively smooth brown or tan skin and snout-vent length at most 83 mm. May or may not have a light middorsal stripe. Average mature male is smaller and darker than the female and has a distinguishable swollen base of thumb and expanded vocal sacks on either side. Breeding call is a series of rapid clacking notes (usually 3-5) that can be compared to the sound of domestic ducks quacking. Larvae have either blackish or olive-gray dorsum with shiny bronze or pinkish sides. Eyes are dorsal; tail fin is high with dark blotches and spots. Eggs encircled by two jelly envelopes each and roughly 2 mm in diameter. Several hundred eggs commonly deposited by females in large tennis ball-sized clumps.