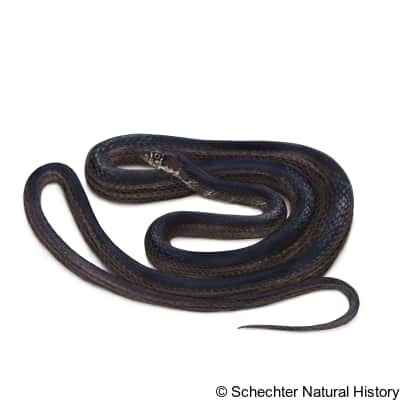 This species has a large range that spreads from the Atlantic coast to the Pacific coast of the United States. This includes Nevada, Utah, Colorada, Nebraska, Missouri, Kentucky, and North Carolina. Further south, the range reaches Baja California, Sinaloa, Queretaro – Mexico, the Gulf Coast of the United States and southern parts of Florida.

In Baja California, you can find them in dunes at the coast, scrub, marshlands, sandy flats, rocky arroyos and thorn forests. In California, they are found in more open areas like grassland, but still can be found at coastal dunes. They eat small mammals; bats, birds, lizards, snakes, amphibians and carrion. Juveniles would also eat large invertebrates.

Adults are averagely 24- 52 inches long. It is a nonlethal slender fast-moving snake with smooth scales. It has a large head and a pair of large eyes to match, a slim neck and a long thin tail. It has earned its name from the braided appearance of the scales on the tail. It has relatively larger scales just above the eyes and 17 rows of scales at the mid-body. This coachwhip has two color phases. In its dark phase, it is dark gray or dark brown to even black. In its light phase, it may appear in tan, pale yellow, light gray with zigzag patterned cross bands on the body but with broader dark bands on the neck area.