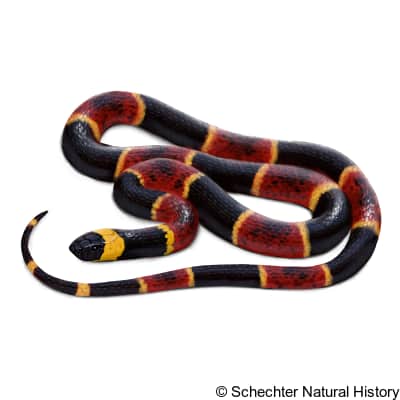 They are scattered in localities in the southern coastal plain. They can be found in pine and scrub oak sandhill habitats but sometimes inhabit hardwood areas and pine flatwoods that undergo seasonal flooding. They are also found hiding in leaf litter, under logs, also crawling on surfaces and when nighttime temperature rises above 26°C. M. tener species are good swimmers; they are shy, secretive and nocturnal in nature. They have been reported to prey on other smaller snakes, lizards, arthropods. Mating takes place from April-May and again August-September in South-Central Texas. Clutches can contain 2-13 eggs which are laid in leaf litters, sawdust piles, rotting logs and stumps, between late May to July.

Coral snakes are known with the black and red coloration with yellow rings. Although those lacking either the black or red pigments that are found in the wild. Their tails are tricolored, black, red, yellow with length of about 6-7cm. The head is round and small, barely distinguished from the neck and consists of 2nasals, 1preocular, 2postocular and a lower jaw which contains a mental separated by 2 pairs of chin shields and 7 infralabials. They also have rounded pupils and relatively small eyes. Coral snakes have their females larger in size than the males, they can grow to 122cm in total length (head to tail) but most of them measure about 61cm. Their dorsal scales are smooth and glossy with no signs of apical pits.