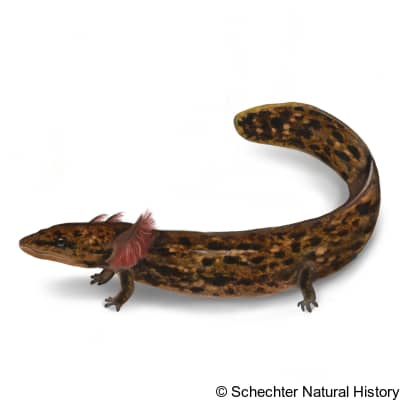 Streams, weedy ponds, lakes and underneath rocks and logs are its usual habitat. This species eats small underwater animals like mollusks, annelids, earthworms and insects. It also feeds on amphibians, snails, insect larvae and carrion. It reaches sexual maturity at the age of six with the females picking up spermatophores in the substratum of the environment laid by the male counterparts and storing them in her spermatheca till the eggs are fertilized. The female mudpuppy lays 20-200 eggs, averaging 60. The eggs lack pigment and are about 5-6 mm. Hatchlings are 2.5cm long and grow to a length of 3.6 cm.

Unlike the common mudpuppy, that has an appearance that ranges from gray to brown color with blue-black spots that are round in shape, the red river mudpuppy is yellowish brown with white stripes on each side of the middorsal area. Growing to a length of 13 inches, this species possesses feathery gills enabling them to breathe only under water and unable to stay on land for a long time. It is also a nocturnal creature and are found during the day if the water is murky. The Necturus Louisianensis has a flat head and short tail that is laterally compressed for swimming. It also has sense organs in its skin to help it detect pressure changes and water movement.