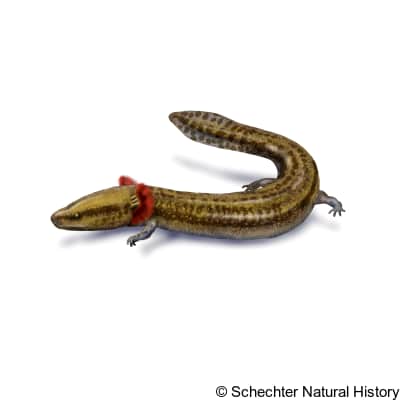 Live in lakes, rivers, ponds, and perennial streams and can be seen in shallow or deep water depending on the season. Commonly found under shelter including rocks, logs, or weeds during the day. They emerge at night to feed on pray including worms, crayfish, and snails. Males and females mate under rocks or logs in shallow water and females will excavate nest cavities in similar areas to suspend 18 to 180 eggs each from the nests' ceilings.

Average size is 11 inches lengthwise, but some can exceed 16 inches. Most distinguishable by red, bushy external gills grown as larva near flat head. Other unique features include a swimming tail fin and an absence of eyelids. Bodies are either gray or brownish-gray with blue-black spots with wide tails and stubby legs and can easily camouflage against silt at the bottom of a pond. Uncommon among other salamanders, females guard their eggs until they hatch. They also are one of the few salamanders to make squeak-like sounds. Males and females generally are same size and have no large differences in appearance. Young are black with long yellow stripes running vertically.