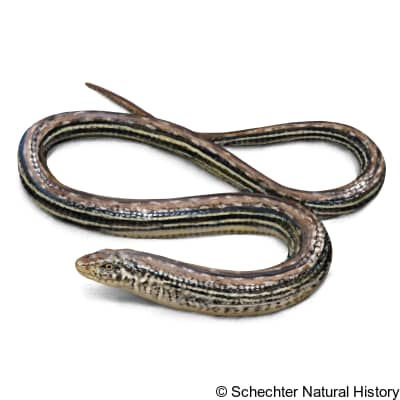 This species is endemic to United States of America. It is usually found from central Illinois west into central Kansas, then through eastern Texas extending across the Mississippi into southern Florida. It is also found in North Carolina and southeast Virginia. The two subspecies are separated by the Mississippi with the O.a. attenuatus in the west and O.a. longicaudus in the east.

The slender glass lizard is predominantly found in a variety of habitats within its range such as dry grasslands, wooded areas, oak savannas, old fields left to fallow and pine barrens. It thrives better in sunny weather and is very active during May to September. It only mates in May and the female lays her eggs in June or early July. Its young hatch after 50- 60 days and mature quickly. It is a carnivore and will eat just about anything that can fit into its mouth, from grasshoppers to other small invertebrates. It is also prey to almost every bird of prey; hawks, falcons and eagles.

An adult can measure from 0.56- 1.06 meters and its mostly due to its extremely long tail which can be up to two and a half times longer than its body length. It is a Legless lizard. Its body is covered with large, plate-like scales that have osteoderms (bony plates) under them which cause the lizard to feel stiff when handled. It has visible external ears. It has a variation of colors ranging from brown, tannish brown to a pale yellow with a dark mid-dorsal stripe which could vary from dark brown to black. It spots two lateral stripes below its lateral groves that appear small on both its sides at approximately one-third up from the venter. The side of its head has sparse brown markings and the underside is either white or pale yellow. Its pointed snout, stiff body scales and movable eyelids will distinguish this legless lizard from snakes. While it is hard to distinguish sexes, little distinction can be noticed by keen eyes that the male is averagely longer and has a wider head than females.