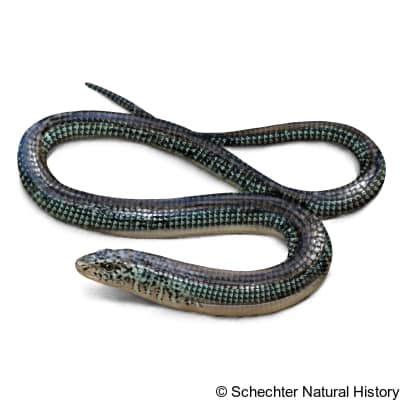 The Ophisaurus ventralis species are found throughout the southern and eastern portions of Georgia and South Carolina. They are most common in sandy areas of the Coastal Plain.

The Eastern glass lizard may be found in various habitats. They are most commonly seen in Flatwoods and around wetlands in sandy niches. Also, the eastern glass lizards are very common in coastal dune habitats. Sometimes, these lizards are even found beneath debris at the tide line. They are very active and often bask in the open sun on the ground with only part of their bodies open. They feed on grasshoppers, crickets, beetles, eggs of other reptiles and so on. Females of this species are oviparous and lay 5-15 eggs in June and July. They do this under logs, boards or any covered object. The females cater to the eggs until they hatch later in the summer.

They range from 18 – 43 inches in length. They are long, slender, legless lizards that resemble snakes on the surface. They differ from snakes in that they have moveable eyelids, external ear openings, and inflexible jaws. They are the longest and heaviest glass lizard in the region. It is usually light brown or yellowish to greenish. This species is differentiated from other glass lizards by the absence of a dark dorsal stripe or dark markings below the side groove. Also by the presence of several vertical whitish bars just behind the head. Older individuals usually have a greenish or speckled colouration, which is not as bold as younger individuals.