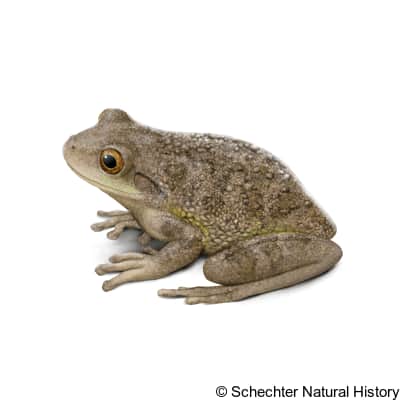 The Cuban Tree Frog Osteopilus is native to the Caribbean regions of Cuba, The Isle of Pines, The Bahamas, The Cayman Island. They can also be found in Seychelles, North America and The Island of Oahu, Hawaii.

The Cuban Tree Frog is a tropical animal and so is usually found in mildly moist Natural or Human-enhanced environment such as swamps, forests, tree canopies, plantations, sandhills, ponds, buildings, urban areas, wetlands, estuaries, lagoons, etc. However, they can sometimes be found in moisture lacking environments like desserts. The Cuban Tree Frogs usually sleeps during the day and hunts for food at night. They are rapacious feeders feeding on both vertebrates and invertebrates. They feed on anything they are able to subdue and fit into their mouth like snails, insects, lizards and even frogs. The Cuban Tree Frog breeds all year round but has a higher breeding rate between May and October. Breeding usually occurs more in isolated areas such as an abandoned pool, ponds, wetlands or human-enhanced environments. Breeding is usually enhanced by rains and storms. Breeding involves the males making loud call that sounds like a squeaking door which attracts the female which is followed by the males competing to mate the female. The female lays eggs which is externally fertilized by the male and hatches within 32 hours.

The Cuban Tree Frog Osteopilus is a large tropical tree frog and the largest frog specie in North America. Its length usually ranges between 28 to 165 millimeters with a body weight of about 57 gram. This specie of frog has a varying color ranging from olive brown, bronze, gray, whitish gray, green, yellow, dark brown or a combination of any of these colors and these color are subject to changes depending on environmental condition or body temperature. The underside of this species is creamy white in color. The skin which is rough and covered with warts secretes a toxic substance which causes a burning sensation to the eyes and nose making it an animal to not be around. They have big protruding eyes. The skin on the head is usually attached to the skull of the adult frog. The limbs on this species comprises of 2 front limbs which are not webbed and 2 back limbs which are to a small extent webbed. Their limbs are large in size making it easy for them to climb and also making them different from other frogs. The tadpoles are darker in color and have a pointed transparent tail distinguishing them from the frogs.